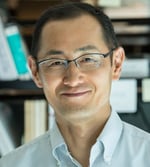 Shinya Yamanaka, MD, PhD, is a senior investigator and the L.K. Whittier Foundation Investigator in Stem Cell Biology at Gladstone Institutes. He is also a professor of anatomy at UC San Francisco, as well as a director and professor of the Center for iPS Cell Research and Application (CiRA) at Kyoto University in Japan.
Yamanaka earned an MD from Kobe University and a PhD from Osaka City University. From 1987 to 1989, he was a resident at the National Osaka Hospital. From 1993 to 1995, he was a postdoctoral fellow at Gladstone. Yamanaka then became an assistant professor at Osaka City University Medical School, and later an associate professor at Nara Institute of Science and Technology, where he eventually became a full professor in 2003. He took his current professor position at Kyoto University in 2004, and was appointed senior investigator at Gladstone Institutes in 2007. Since 2008, he has been directing CiRA.

In 2012, Yamanaka was awarded the Nobel Prize in Physiology or Medicine for his discovery that adult somatic cells can be reprogrammed into pluripotent cells. In addition, he has received many awards and honors, including the Albert Lasker Basic Medical Research Award, the Wolf Prize in Medicine, the Millennium Technology Award, the Shaw Prize, the Kyoto Prize for Advanced Technology, the Gairdner International Award, the Robert Koch Award, and the March of Dimes Prize.