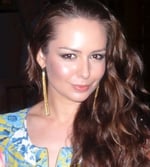 Denitsa Milanova is a co-founder and CEO of Marble Therapeutics. She played a significant role in the creation, financing and scientific development of Marble, a new biotechnology company with an overarching goal to pioneer real-world rejuvenation and enhancement products through a first-in-kind causal inference understanding of nonlinear dynamics in biology. Prior to founding Marble, she led a team to advance the technology underlying Marble’s Empirical Dynamic Modeling -driven cell engineering platform in George Church’s Lab at the Wyss Institute of Harvard Medical School. There she developed the first de novo gene regulatory network of skin aging, and co-discovered novel genetic targets of rejuvenation.

Ms. Milanova holds an M.S. and Ph.D. in Mechanical Engineering from Stanford University. There she was awarded the Stanford Graduate Fellowship in Engineering and the Stanford Bio-X Fellowship. She trained in applied math, fluid dynamics and genetics, and developed the first microfluidic-powered method for single- nucleus and cytosol RNA sequencing. She holds a B.S. in Energy Systems from University of Central Florida, graduating first in her class. As an undergraduate, she led work on nanoparticle and carbon nanotube formulations. Ms. Milanova completed an M.S. in Management as a Medtronic Fellow, an executive M.B.A. program from Stanford University.